Number five in the family is the WM1.
It is said that it was made for women and other people with smaller hands. It ended up as a great knife for small game like hare, ptarmigan or as a great "survival knife" in the mushroom basket together with a firesteel and a whistle.


There are six known variations of this knife.

In the early days there were a coated version, that surfaces from time to time on internet auctions.

.. and 200 numbered with micarta handles. 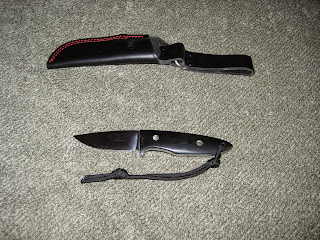 WM1 Lam VG10
Eventually the WM1 too got laminated.

In the beginning you could choose from three different sheaths.
The leather sheath that looked really cute.

Nowadays they are all extinct and there is only the Zytel sheath.

Like all the "early" knifes there was a bare blade, but it is also extinct.


The H1 (hunting) knife was the fourth knife to be introduced by Fallkniven.
It has influences from the sami knives in that it has no finger guard, and yes, i have cut my index finger on it.

The first 500 was numbered "opposite" the logo. The handle was also "softer" than the F1. 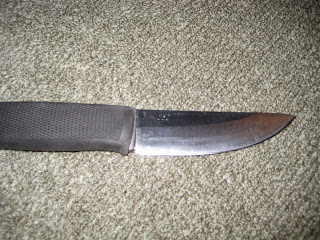 There was also a small series of it with curly birch / reindeer antler handles.


H1 Laminated VG10.
The early ones had the "softer" handle and the current ones has the same as the F1.
You can see the difference since the older looks less "reflective" (see above picture).


The first knives came with a leather sheath that looks the same today.
The early ones had two plastic blocks to cover the blade.
Current versions has a plastic insert similar to the KK sheath.

There was also a kydex sheath available. I have only seen it once and it is now extinct.

Today you can also get a zytel sheath like all the other knives.


You could also get a "bare" blade for the Lam VG10, but they are more or less extinct.


So far in the series: